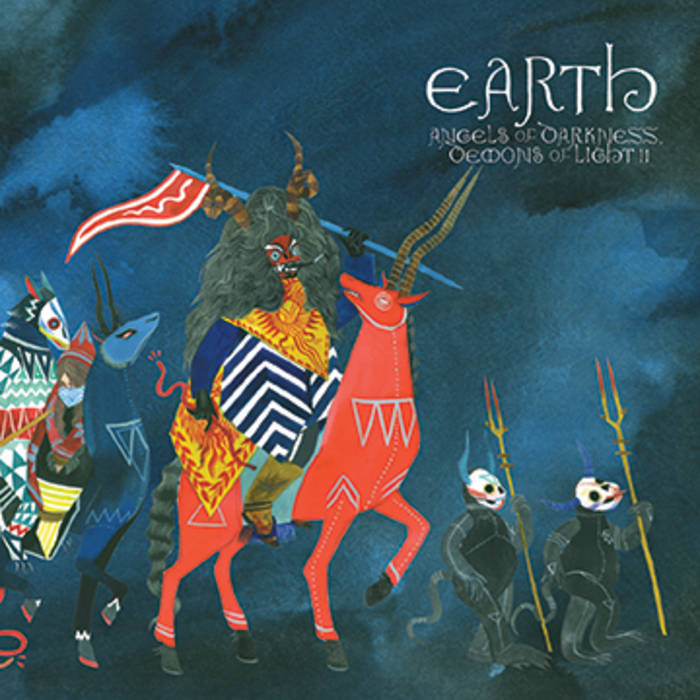 As your speakers are crushed by the first riff of “Old Black” – the opening track on Earth’s latest, Angels of Darkness, Demons of Light 1 – images begin flashing across your brain. Instantly, your mind takes you back to the old West. Tumbleweeds, whiskey, and gunplay are some of your first thoughts as your brain jumps from a saloon, where a violent fight has broken out, to a dusty prairie where you see a strong, hunched figure in the distance.
It’s your run-of-the-mill cowboy. But he’s not grinning sarcastically or trying to look tough. He’s barely capable of standing. He’s lurching, at best, and he plummets to the dirt, fists first, only to push himself back up to continue his trek. There are bullet holes all over his jacket and he’s bleeding badly, barely able to breathe without coughing up a bit of blood. And he hits the ground again, only to stumble to one knee before you rush to his side. The cowboy looks at you, coughs twice, and begins waxing on his current state of pain and anguish.

And just like that, you’re immersed in the sounds of Angels 1. It’s Earth’s first album since 2008’s immense and critically acclaimed The Bees Made Honey in the Lion’s Skull. And like that record, Angels 1 follows the band’s sonic progression made evident on 2005’s Hex. It was that project that brought forth Earth’s new sound and style. It also marked the return of Dylan Carlson, who, if you don’t know, is the man behind Earth. Prior to Hex’s release, the band hadn’t released anything since 1996’s Pentastar: In the Style of Demons, an affair very much in line with their origins in soul-shattering, droning doom metal.

Rather, on Angels of Darkness, Demons of Light 1, he returns for his fourth LP with drummer Adrienne Davies, whose tasteful, robust, and slow swing has provided essential ballast for Carlson's.

To be fair, Carlson was beginning to show his movement toward slightly more straightforward rock there. But he would soon run into drug and legal troubles, which resulted in his taking considerable time off from music to focus on fixing his personal life. Nine years later, Hex hit us all like a ton of bricks with its country music influences and less distorted guitar work. And as Carlson and company continued recording, his music kept on growing and expanding on the drone doom sound that he pioneered early in his career.

Now, that’s not to say Earth’s music has all of a sudden become entirely accessible and palatable for your every-day music listener on Angels 1. The songs are all longer than seven minutes, with the title-track closing the album at 20-plus minutes. And amidst the cleaner tones it’s still got some heaviness that might turn off some of you. But there’s a lot more traditional musicianship along with more focused songwriting throughout Angels 1. That can be partially attributed to Lori Goldston, whose cello playing adds a frazzled haunting vibe, especially on “Father Midnight”.

Elsewhere, though, Carlson’s immense guitar remains the focal point of Earth, from his echoing strokes on the chilling-yet-gorgeous “Descent to the Zenith” to the brighter, rising tones of the title-track. Yet, his licks are at their best when accompanied by finely juxtaposed, gruff bass riffs, such as on “Hell’s Winter”. There is also ample emotion being evoked across Angels 1‘s hour-long run time. It’s an extremely dark, brooding affair that brings to mind the aforementioned battered and bruised cowboy. That cowboy, in the case of the album, is Carlson, who has been suffering from health-related issues. He has said in interviews that it’s likely his personal trials have made their way into his songwriting, which is why an air of mourning can be heard here.

The fact that he’s able to convey that much feeling across a fully instrumental piece without resorting to crescendos, bright guitars, or other cheap emotive tactics says a lot about the record. Even if you’re frightened by the longer-than-long track lengths, the heavier guitars, and the lack of vocals, Earth’s latest album deserves your attention.

After “Father Midnight” and “Hell’s Winter,” the deeper magic and Aslan’s breath — a cough of hope in a fatalist wheeze. There is something dreadful about the beauty of this dawn, the inevitability of its cycle suggesting the daunting physicality of Ted Hughes’ Iron Man on the march, as if dread were, in fact, a condition of the beautiful, whose details can only be examined or demonstrated in the shade of anxiety’s big pink parasol. Fear circumscribes the world, drawing the earth towards it, submitting its sign to the siphon squeeze of the pars totalis. If Earth have taken their furthest steps yet from the cloistered encampment of doom, tapering at the edges of electric folk, it is only in order to discover what they already knew: that dread is the condition of sensitivity wherein the beauty of details is magnified. In this sense, Angels of Darkness, Demons of Light II represents a spilling-forth from the citadel, an eldritch ritual of fire and shadow performed in the shelter of hallucinogenic crags. The Earth machine feeds on form to stabilize its torpor. Its hibernation is a site of constant, slow-motion chewing: a continuum of crushing and grinding, a ruminant dread, a stoner Unicron.

Monsters are crises that demand to be resolved, and the cartoonish Tairona figurines of Stacey Rozich that scuttle and swoon across the two volumes of Angels of Darkness, Demons of Light suggest a crisis of representation decisively resolved in a bold skewering of angles. Giorgio DeChirico’s faceless figures of urban alienation have got lost on the West Highland Way; folk jazz combo The Advancement have gone on tour with Spinal Tap. Ivy-twining fret runs snake into eaves of feedback in a chiaroscuro counterpoint. Power chords jangle with the reverb of a nerve consistently struck and frayed. The drumming, a secret law — a hidden, spectral centrifuge animated and concealed by a tension between a cheeseparing economy of meter and a fiddly, indulgent breadth of timbre (Moe Tucker on her wedding night?), recalling Levinas’ grimly seductive vision of ontic unease, the Il y a: “It is something resembling what one hears when one puts an empty shell close to the ear, as if the emptiness were full, as if the silence were a noise.”

The timeless mastery of the virtuoso craftsmen and their negotiations with history: this is the vocabulary of classic heavy rock, crucially mangled by its means; producing the effect of the weird — what Harold Bloom variously described as “an originality that can achieve canonical status… a strangeness that we never altogether assimilate… such a given that we are blinded to its idiosyncrasies”:

“Some years ago, on a stormy night in New Haven, I sat down to reread, yet once more, John Milton’s Paradise Lost… I wanted to start all over again with the poem: to read it as though I had never read it before, indeed as though no one had ever read it before me… and while I read, until I fell asleep in the middle of the night, the poem’s initial familiarity began to dissolve… although the poem is a biblical epic, in classical form, the peculiar impression it gave me was what I generally ascribe to literary fantasy or science fiction, not to heroic epic. Weirdness was its overwhelming effect.” (Harold Bloom, An Elegy For The Canon)

The ambient materialism of Angels of Darkness, Demons of Light II presents a similarly weird, irregular surface upon which, unevenly pressed, a codex of dark ecstasies and florid circumlocution lies — traceable by touch, cogent in dreams, the fibers of its text bear the weight of a psychedelic meisterwerk. It conjures images of fossils, of precious stones: strange mutations wrought by time, the undeniable force of abstractions made concrete.