The original PC-9821 release used pixel art while wider re-releases on the 3DO, PlayStation, and Sega Saturn featured cel animation by Anime International Company. An English localization was planned for the Saturn, but canceled with Kojima citing technical problems with the translation.

Happy new year, and welcome back to another episode of Sunday Review. This time I’m going to review the only Hideo Kojima game that has never seen the light of day in the west. But it’s one that is very popular among Kojima fans, and received a major amount of exposure in the gaming media just a few years ago. The game finally got a fan translation for the PS1 version back in 2009, and it’s been one of the most popular fan translations ever since. It’s so popular that even popular YouTubers like Super Bunnyhop have covered it. SPOILERS! He didn’t like it though:

Policenauts follows the story of Jonathan Ingram, who has been chosen as one of the 5 “Policenauts” – astronauts with Police training – to ensure the safety of the first batch of immigrants to mankind’s first space colony, Beyond Coast, in the year 2013. Among Jonathan in the “Policenauts” crew are Gates Becker from Great Britain’s Scotland Yard, Joseph Sadaoki Tokugawa from the Tokyo Metropolitan Police, Salvatore Toscanini from the NYPD, and Jonathan’s partner from the LAPD, Ed Brown. While testing out a new type of space suit in a space walking experiment, Jonathan’s suit malfunctions and drifts away deep into space in front of the other Policenauts. And thanks to the cold sleep module on his suit, Jonathan goes into cryogenic sleep, which preserves his youth. He is then found 25 years later and brought back to earth. We are then taken to the year 2040, where Jonathan works as a private investigator in a district of Los Angeles called “Old L.A.”. There, he is visited by his ex-wife, Lorraine, who asks him for his help in finding her current husband, a Japanese man named Kenzo Hojo. The only clues that were left behind by Hojo are a torn leaf, a set of pills, and the word “Plato.” Unsure on whether to take on the case or not, Lorraine decides to let Jonathan think about it for a while and leaves. However, after Lorraine leaves his office, Jonathan looks out the window and notices a man in a black biker suit holding a remote control. He tries to get Lorraine out of harm’s way, but the man presses the button on the remote control, destroying Lorraine’s Rolls-Royce and severely injures Lorraine. Jonathan chases after him, and after firing several shots at him, notices that he was bleeding out white blood. Jonathan then returns to Lorraine, who tells him that her daughter, Karen, is sick, and asks to help her. However, Lorraine then succumbs to her injuries and dies in Jonathan’s arms. He then decides to take on Lorraine’s requests, and heads out to Beyond Coast.

While on his flight to Beyond Coast, Jonathan is sitting next to a strange and different looking human. The man introduces himself as Tony Redwood, and says that he is a “Frozener” – a race of artificially-conceived human beings who possess genes best suited to the environment of outer space, and have artificial white blood. Jonathan finds him to be suspicious, but he leaves him alone – for now. Upon arrival, he then heads to the Beyond Coast Police Department, where he meets up with his former partner Ed Brown, and asks him for his assistance in investigating Hojo’s disappearance and Lorraine’s murder. Though Ed turns him down at first, he eventually agrees to help Jonathan. The two of them go out on their investigation, only to eventually find out that the people who they thought were their friends had become their enemies, and that there may be no way to get out of this investigation alive…

Policenauts is a point-and-click visual novel, so you can move the cursor across the screen and have Jonathan analyze objects in the area or have him talk to other characters that are with him. In the PS1 and 3DO versions, you can move the cursor by using the controller’s D-pads, but with the Sega Saturn version, you can use the Japan-only Saturn mouse accessory to move the cursor across the screen. You can save at any point in the game, though you can also save at the end of each chapter. Also, this version, unlike the PS1 and 3DO versions, has scenes that are from the original PC-98 version.

Like it’s predecessor Snatcher, there are shooting segments where you aim the cursor across the screen to take out enemies before your health is completely depleted. While you are only given the option to aim with the D-pad in the PS1 and 3DO versions, the Sega Saturn version gives you the option to use the Saturn Light Gun accessory in the shooting segments if you hook it up in the second controller port.

You know what? Fuck it. Believe it or not, this game has A LOT of fanservice, which is very unusual for a Kojima title. There is tons of cleavage, and there are scenes where Jonathan will say very sexual things about the female characters that you encounter throughout the game. Here…are…some examples: 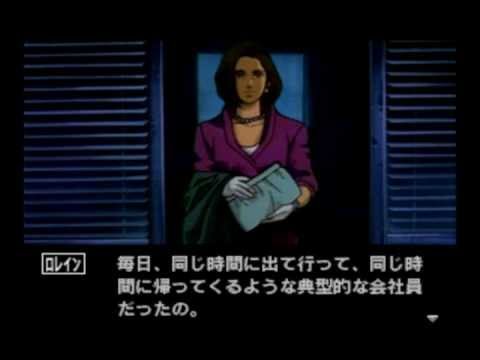 Jonathan Ingram – Age: 30 – The main character of Policenauts. He was one of the original five “Policenauts” who were assigned to protect the first batch of immigrants to mankind’s first space colony Beyond Coast in 2013. However, due to his space suit malfunctioning, he fell deep into space, and entered a state of cryogenic sleep until he was discovered by an exploration crew 25 years later. He now works as a private investigator in Los Angeles, often taking on cases which involve victims of drug and organ smuggling rings.

Ed Brown – Age: 55 – Ed was Jonathan’s former partner during his LAPD days, but now he is the chief of the Beyond Coast PD’s Vice Unit. He was also one of the original five “Policenauts” who were assigned to protect the first batch of immigrants to mankind’s first space colony Beyond Coast in 2013. He is also a single father and has two children – his daughter Anna, and his adopted son Marc. He eventually teams up with Jonathan once again and is determined to help him find out who killed Lorraine and investigate Hojo’s disappearance.

Karen Hojo – Age: 26 – Karen is the heroine of Policenauts. She is the daughter of Lorraine and Hojo, and bears a striking resemblance to Lorraine. She is an anchorwoman for a news station on Beyond Coast, and a rather popular one as well. She is diagnosed with a rare type of cancer called secondary aplastic anemia, and in order for her to be cured, she requires a bone marrow transplant from a matching HLA type.

Tony Redwood – Age: 23 – Tony is a member of Beyond Coast PD’s SWAT team called the Advance Police Unit. He is a so-called “Frozener” – a race of artificially-conceived humans who possess genes best suited to the environment of outer space, and carry artificial white blood. He pilots one of the EMPS (Extravehicular Mobility Police Suit), and is Beyond Coast PD’s ace pilot, which got him the nickname “Mr. Goddard”, after the EMPS model used by AP. Jonathan and Ed view him as suspicious, and keep a close eye on him in the second half of the game.

Gates Becker – Age: 56 – The chief of Beyond Coast PD. He was originally an officer from Great Britain’s Scotland Yard, and was one of the original five “Policenauts” who were assigned to protect the first batch of immigrants to mankind’s first space colony Beyond Coast in 2013. 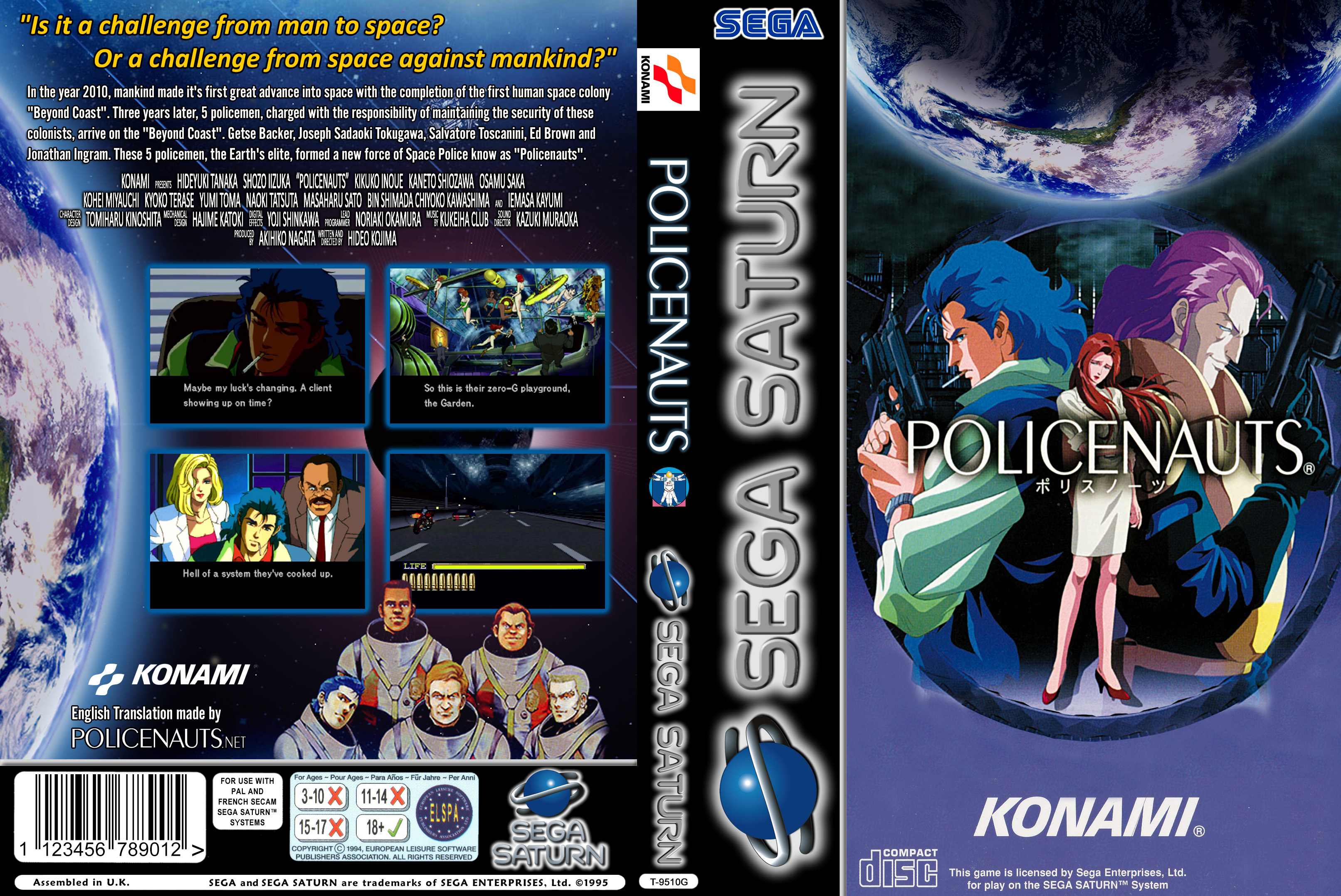 Joseph Sadaoki Tokugawa – Age: 60 – The head of the Tokugawa Corporation in Beyond Coast. He was one of the original five “Policenauts” who were assigned to protect the first batch of immigrants to mankind’s first space colony Beyond Coast in 2013. He was an officer for Beyond Coast PD for a short time, but then took over the Tokugawa Corp., following his father’s retirement. Tokugawa is the most powerful man on Beyond Coast, and pretty much controls the colony’s media.

Salvatore Toscanini – Age: 58 – Head of security at Tokugawa Corporation’s Moon Plant. He was a former NYPD officer, and was one of the original five “Policenauts” who were assigned to protect the first batch of immigrants to mankind’s first space colony Beyond Coast in 2013. Like Tokugawa, he was also a former Beyond Coast PD officer for a short time, but then went to work at Tokugawa Corp., and is now the head of security at their moon plant.

Well, this game blew me away when I first saw it. I first saw footage of this game in World of Longplays’ Policenauts walkthrough on YouTube, and I said to myself, “I WANT THIS!” I tried to burn myself a copy of the PS1 version, only to find out that I needed a chipped PS1 or a PS1 boot disc that could let me played burned PS1 games. I now have a chipped PS1, but when me and a friend of mine tried burning the PS1 version with the english patch, it wouldn’t work on my chipped PS1. So if anyone can help me in that area, please comment below. 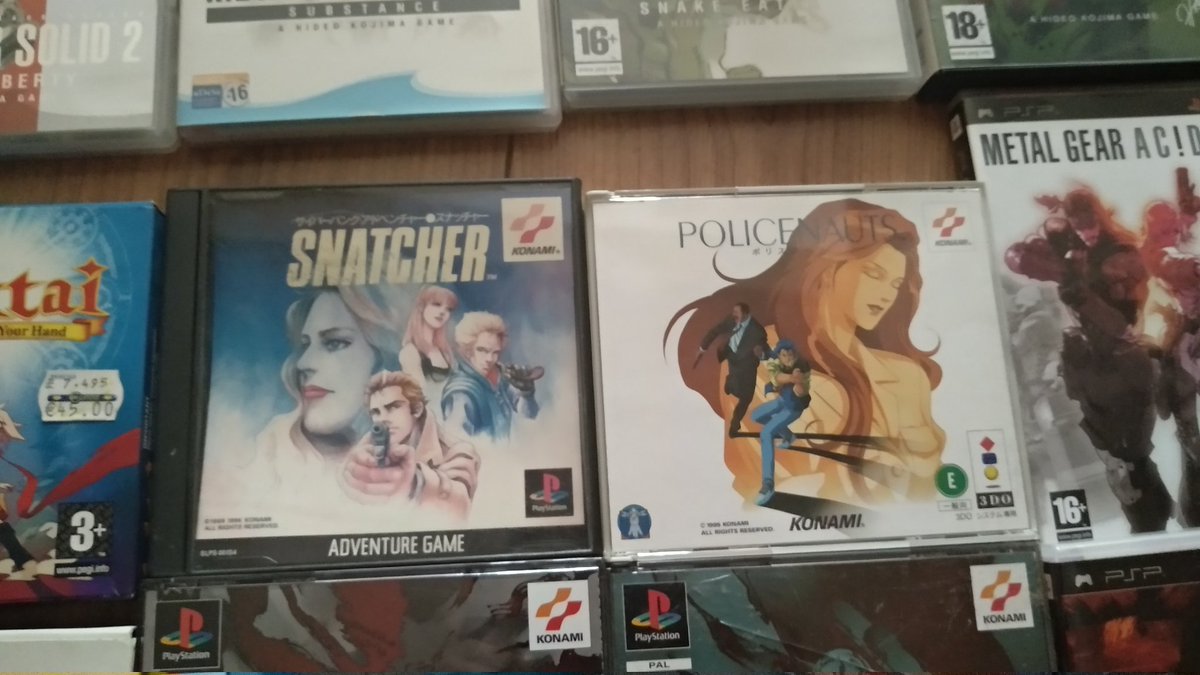 Anyway, when I got a Sega Saturn a few years ago, I picked up the Saturn version, using the script from the PS1 version to help me play through the game, and I enjoyed it very much. The game has tons of great ideas, and is very creative. The plot was solid, and it leaves you guessing the whole way through, with a massive load of plot twists as well. The cast of characters were also decent and some are very likable too, especially Jonathan, who has a lot of hilarious lines when it comes to the scenes with fanservice. Speaking of the fanservice, though there is a lot of it, it’s actually tolerable. There isn’t anything that’s too excessive or oversaturated, like in modern ecchi animes like Rosario + Vampire, Highschool DxD, etc., just some scenes where you make Jonathan touch some boobs or listen to Jonathan talk dirty about the women he encounters throughout the game. Moving on, the gameplay is very good, the point-and-click interface was well integrated and a lot better than the menu interface in other visual novels, and the shooting scenes were also well integrated and provide a fair degree of challenge. The character designs and animation were also very well done too. Overall, Policenauts is an excellent visual novel with tons of replay value, and you should totally check it out if you’re looking for a great visual novel.

Also, the Sega Saturn version got an English patch made for it by the translation group SaturnAR, based in Argentina.

The team is also working to translate the game into many different languages as well.