Shukno Lanka has been acquired by Databazaar Media Ventures and will be releasing in the USA soon.

Email us your movie review at [email protected] and receive 2 FREE MOVIE TICKETs.

Shukno Lanka means the dry red chilli that is added to every Indian curry to add the right kick to the dish. Yet, its contribution to the final taste remains invisible, marginalised and unrecognized. Director and writer Gaurav Pandey uses this as a metaphor for Chinu Nandy (Mithun Chakraborty), who, like millions of youngsters with stardust in their eyes, stepped into the rather murky world of films only to drag his tired feet and end up as a junior artiste. Chinu Nandy has been at it for three decades and has come to terms with the mundaneness of his life taking relief from his contented life with wife Bela (Angana Bose) who is a couch potato but a cheerful soul.

The parallel storyline is that of the internationally renowned director Joy Sundar Sen (Sabyasachi Chakraborty) whose life story throws up the ironic contrasts in the two worlds that exist within the same industry. Joy Sundar’s journey into filmmaking is littered with international awards. Joy Sundar meets Isabella (Emma Brown), an Australian actress at the Berlinale 2007 when he goes to pick an award. They become friends and part with Isabella’s appeal to call her if he ever he wanted her help. 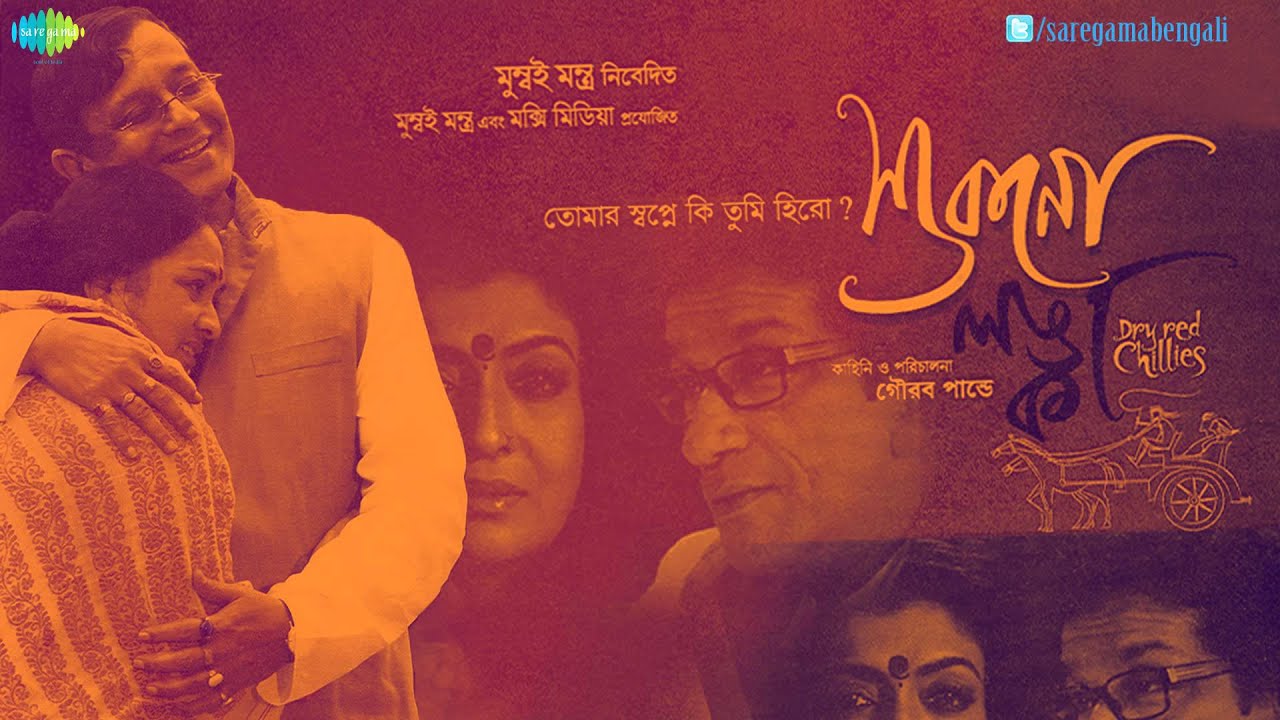 The two contrasting worlds – Chinu Nandy’s anonymous world filled with the struggle of getting work on a day-to-day basis, through humiliation, oppression, insults from the powers-that-be, and the rich, famous and powerful world of Joy Sundar Sen come together when the latter decides to make a film based on Ritwik Ghatak’s storyParashpathar, about an ordinary man who believes he has the power of bringing the dead back to life. He chooses Chinu to essay the character dramatically changing the graph of Nandy’s life overnight from anonymity to the limelight.

The three strands of this layered film are blended imaginatively and aesthetically through a night long ride Nandy decides to take on a landau with his surprised, confused but thrilled wife. The ride is punctuated with flashbacks into Chinu Nandy’s life as he narrates them episodically to Bela, things he had never told her before, including the sudden stardom thrust on him. This ride takes the audience along the deserted streets of Kolkata at night, with street lights throwing their slanted lines of light on the roads, punctured with the rhythmic sound of the horse’s hoofs and the landau driver’s cheerful comments. Chinu lives in a one-room-kitchen place in a narrow bylane in Howrah where the local boys heckle him as he trudges to and from work commuting in a tramcar everyday; where the tea-boy bypasses him while passing the ‘cutting’ tea around; where the top hero suddenly asks the assistant director to replace Chinu with another junior artiste just like that! We also discover how the great Joy Sundar Sen treats his wife Jhilik (Debasree Roy) practically like dirt though she desperately tries to draw his attention. He is as self-engrossed, arrogant, selfish and proud of his power, fame and talent as Chinu is self-effacing and reticent.

Isabella flies down from Australia to fund Joy Sundar’s film when his regular producer ditches him before shooting begins. Chinu warms up to Isabella when he discovers that she does not shrug him off like the others do. On the last day of the shoot, Chinu cannot deliver after 16 NG shots. When Joy Sundar asks him what the problem is, Chinu says, “You are my problem,” going on to unfold how every minute he played hero, the director had not once forgotten or had let him forget that he was no more than Chinu Nandy, the junior artiste he had picked to play Chandrashekhar, the principal character in his film. Earlier, in a telling shot, when a humble Chinu asks him, “Will the audience accept me sir?” Joy Sundar laughs in his face and says, “they won’t accept you, they will accept me.” When Chinu reports late on the last day because the car broke down on the way, Joy Sundar shuts him up before he can explain the delay by telling him, “When did a production car ever go to pick you up Mr. Nandy?” These small humiliations add up leading to Chinu’s outburst, finally humbling Sen.

The night ends with the break of dawn; the night sky lightens to make place for day. Early morning wrestlers get busy at their akhras and another working day begins. For Nandy however, it is a different story. He drags his wife off the landau when they reach Chowringhee to halt outside the Metro theatre. He points out at the hoarding high above. His face in blow-up, sporting dark framed glasses and a moustache, smiles out of the hoarding that carries the names of the director, the producer and the writer. But Chinu Nandy’s name is missing. Chinu’s wife, tearful, hugs him happily.

Shukno Lanka begins, centers on and ends with Chinu Nandy alias Mithun Chakraborty in yet another role that carves out a model lesson in acting. He effortlessly deconstructs his masalaTulkalam image to create an original Chinu Nandy till there is no Mithun left. Amazing! The two glaring elements are in his less-than-perfect East Bengali diction when he talks to his wife, and his conversation with God in the small temple in his home – a hangover of Amitabh Bachchan’s Deewarpiece albeit in a different form. It is superfluous and melodramatic. His diffident gait, halting steps, slow talk, taking in the brickbats, not overawed by the bouquets brings to life a junior artiste who has been at this game for three long decades. Sabyasachi Chakraborty as Joy Sundar Sen injects the character with the arrogance and self-aggrandizement it demands, including the way he dismisses his wife by simply not responding to her overtures and appeals. Debasree Roy is very good in the varied shades that Jhilik calls for but her outburst in the studios leaves a question mark as does her sudden breaking into dance at the party scene in the end. Emma Brown is soft, subtle, low-key and totally in control. Angana Bose is adelight to watch. There is an amusing scene where the local neighbourhood is gathered in Chinu’s room to watch his interview on a satellite channel as Chinu, sitting on a chair, shoos them to silence when they begin to chatter. The late Kunal Mitra as a top star of Tollygunge and Shaheb Chatterjee as another famous tinsel item who is more drunk than sober offer good insights into characterizations but are not very reflective of film heroes in real life. So drawing generalizations would be unflattering and unfair.

The music, by Debjyoti Mishra is a fine blend of old songs reinvented and sung by new singers such as the Kishore Kumarshing nei tobu naam taar shingho or the Baul song, and fresh compositions. Pandey’s idea of placing the songs during the landau ride is very good. Indraneel Ghosh’s art direction as the camera scans locations of every kind from Chinu Nandy’s small flat with its big bed, small television set, and a small temple set against walls painted a bright turquoise blue, to the studio floors littered with wires and lights and camera stands etc, to Joy Sundar’s spacious spic-and-span flat reflective of Jhilik’s playing the ideal wife is wonderful. Mahesh Aney, who has filmed a Bengali film completely shot in Kolkata for the first time, is mind-blowing, creating poetry out of the streets of Kolkata during the night-long landau ride. The ride itself tends to drag at places but this is undercut by the beautiful climax. Well done Gaurav Pandey in the first full-length Bengali feature film that casts a junior artiste as the central character.

by: Shoma A. Chatterji

Mithun Chakraborty at the premiere of Skukno Lanka

Shukno Lanka is the story of a Junior artist living in a tinsel town, played by Mithun Chakraborty, who is yet to taste success after a struggle of 30 years of acting career. Sabyasachi Chakrabarty plays the character of Joy Sundar Sen, who is inspired by Ritwik Ghatak casts junior artiste Chinu Nandi a chance in the lead role in his next venture.[1]

The film motivates thousands of junior artistes, when the character played by Mithun gets signed for an international project as the leading man.[2]

The film has allusions to the works of Ritwik Ghatak and Satyajit Ray, and even the character played by Sabyasachi Chakrabarty has apparent similarities with Ray.

Chinu Nandi (Mithun Chakraborty) was a talented part-time actor and full-time employee of a coal-mine. Once he loses his job, he takes up acting as his full-time job.However, not starting in the profession early proves to be his demerit. He finds himself as a 250 bucks per day actor, who gets paid only if he gets a chance to play some part on the day. He is cast mainly as elderly house-servants and similar small characters in thoroughly commercial movies. Even so, he tries to give his best in such roles, which makes the stars of such movies (mainly Tublai, played by late Kunal Mitra) insecure, and they start to avoid giving him roles.

Meanwhile, Joy Sundar Sen (Sabyasachi Chakrabarty), a world-renowned director who recently won an award for his movie at the Berlin Film Festival, starts working on his new project: a movie based on Ritwik Ghatak's short story Porosh Pathor (The Philosopher's Stone). In order to portray the protagonist of this movie (Chandrakant), Sen selects Chinu Nandi, much to the dismay of the superstars of the industry, some of whom are openly hostile with Nandi for being 'the chosen one'.

Through the course of filming this movie, we see a lot of these two characters, their sincerity, their devotion to their fields, their love for art, and their talent. When it comes to family, however, Nandi is very happy being a poor simpleton with his wife (Angana Bose), whom he loves very dearly, and cherishes his hobby of cuisine. Sen, on the contrary, is indifferent to his wife (Debashree Roy), who constantly tries to make him feel her presence through her love for him.

The movie, after a couple of obstacles, finally gets released, and everything falls into place. Sen and his wife revive their love for each other, and Nandi wins the respect of his wife and the whole neighbourhood.

In an interview Mithun Chakraborty talked about his character Chinu Nandi– this character gave him an opportunity to retrace his struggling days. He told– '.It has taken me back closer to my roots. But if you look closely, I, Mithun Chakraborty, have not completely outgrown the Chinu Nandy of Shukno Lanka. In a way all of us are bit-role players in the drama of life.'[1]

Shukno Lanka won Mithun, the Best Actor award in the Critics category of Star Jalsha Awards 2011 for the year 2010.[4]