Query Execution History logs every SQL statement that you run in a file on your disk or in a table in a database you specify with a connection string. This way, if you're working on some script you can get the full history of every change you've made. SQL Statements are saved in a list that is written to a file and/or a database with a timer which you can set to a desired interval. Older query history logs can be auto deleted. Time after which the logs are deleted is user settable. The size of the code to be saved can also be set up to the maximum of 5 MB of code.
Current window history is a dockable window that shows queries executed in a currently active window. It alse has a search box at the top that filters results as you type. Each entry also shows the color of the server/database it was run on. This is very helpful if you change your connection in the same query window.
Global Replacement Texts is a feature that lets you put custom keys, which are then replaced by their defined values, in following features: SQL Snippets, CRUD Generator, Run Custom Scripts and New Query Template. All keys have to be surrounded by pipe characters like so: ReplacementKey . There are 4 predefined replacements that you can use: CurrentDateInYMD , CurrentTime , CurrentWinUserName and CurrentSQLUserName . You can add as many custom ones as you wish. There's also an advanced option where you can set your key's value to be T-SQL script that will execute and replace the key with the value in the first row and column in the returned result set. All T-SQL statements are run under READ UNCOMMITTED isolation level. They are run with the contextually current active connection in SSMS. If there's an error the returned replacement value will say the error happened.
SQL Editor Plus (available only in SSMS 2012 and up) extendes the editor with the following options:

Rename Tab by right-clicking the window tab or pressing Ctrl+K, Ctrl+R in your query window.
If you're tired of long query names like 'SQLQuery1.sql - LongTextHere',
then simply rename it to whatever you wish. The rename will only apply to the visible window text and not to the underlying filename, tooltip or SQL History saving window caption.

This one can be a real life saver.
It's called the Accidental Data Destruction Protector.
It pops an 'Are you sure?' window if it detects you've executed a DELETE or UPDATE statements without a WHERE clause, a TRUNCATE statement or a DROP TABLE statement. If you're sure you want to proceed just press Enter, F5 or Ctrl+E to continue execution. By default it checks for all four destructive statements only if you're executing a selected text. All of this can be set in Options.
Feature: SQL Snippets
SQL Snippets give you the ability to type shortcuts in editor which after pressing Enter or Tab turn into a predefined code block. You can have as many SQL snippets as you wish.
Since version 1.8 snippets can be exported and imported by themselves.
Since version 1.9 snippets can be saved to html or printed out directly.
Since version 2.7 You can also use {C} where you want your cursor to be after the snippet has been expanded. 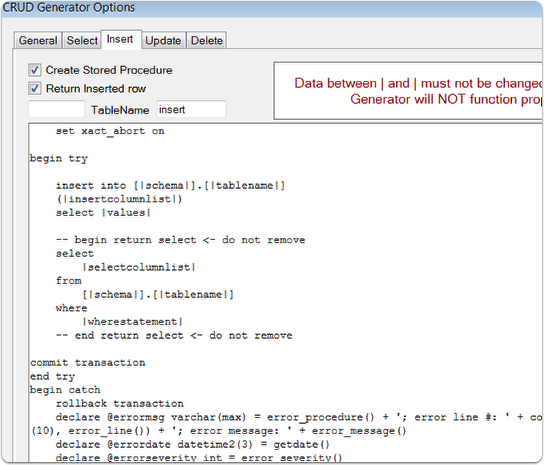 Copy selected or all execution plans to a bitmap that is saved either the clipboard or to a file. Large execution plans that don't fit in the window are also copied in full. Width of a picture containing all execution plans is equal to the width of the widest execution plan.
Uppercase/Lowercase keywords and proper case Database Object Names. Set all keywords to uppercase or lowercase letters. Custom keywords can be added. Format all database objects to their proper case sensitive name. You can also end every statement with a semicolon (;) since this is the new standard.
Find all occurrences of your search string in the results in datagrid mode. You can also search only in specific grid columns by preselecting a cell in each column you wish to search in.Multiple cell selecting is done with Ctrl + Left mouse click. Cells that contain found values are visibly colored.
SSMS Tools Pack 5.0 is out with beta support for SSMS 18, improved features, bug fixes, stability and speed improvements.
2019-03-27 00:00:00
Beta support for SSMS 18
Beta support for SSMS 18 preview releases.
Any reported issues will be fixed in the next version.
Manage License Activations
Manage your license details and number of activated machines by yourself.
Great in case of forgetting to deactivate an old machine.
Features Needing Database Caching
New: Finer database cache content control. Added support for removing all or some database schemas from cache.
New: Filter databases to load into cache. Specify any direct comparison filter or regex filter on server and/or database names. Matched filter entries are not loaded into database cache.
Insert Statements Generator
New: Full culture independent date formatting. All dates can now be formatted with the current culture or a culture independent option.
New: Script grid results to clipboard in addition to scripting them into an editor window.
Current version works in:
SSMS 18, SSMS 17,
SSMS 2016, SSMS 2014, SSMS 2012,
SSMS 2008 R2, SSMS 2008
Only for V.I.P